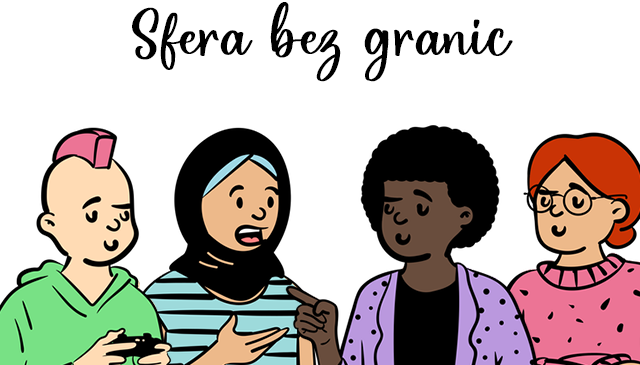 In view of the fact that we are approaching Christmas, we should all have an answer to the question: „How is college going?” already prepared. There is no doubt, that this tricky and nasty question will be one of the least liked guests during Christmas Eve. However, before we start complaining about our grandma being way too nosy, nephews begging to play with them or parents asking us to set the table, we should all stop for a second and think about those who are not going home for Christmas. Viktar and Irina, students of our university, have to wait 9 more years to be able to come back to their home country – Belarus. This article tells their amazing yet complicated story and exposes their emotions and feelings.

Each one of us had the opportunity to experience the situation in which even a seemingly innocent decision can significantly affect our lives. One unfortunate choice can irreversibly change our future, and sometimes being in the wrong place at the wrong time is enough to suffer serious consequences. Talking about one’s past isn’t an easy task, especially if that past is complex and hard to come back to. Therefore, it’s worth listening to the story told by Irina and Viktar who decided to present it to us in detail and speak openly about how they arrived at our university.

My name is Viktar, I come from Belarus and I’m currently studying Management at the Nicolaus Copernicus University. I’m participating in the program for the Belarusian students that experienced repression. This initiative is in the name of Konstanty Kalinowski and I am part of it because of the fact that during the demostrations in Belarus in 2020, I was caught, I went to jail and I was kicked out of college. Now I am in Poland and the previously mentioned program gives me a language course and a scholarship – not a very big one but it is good to have it anyway.

In order to fully understand Viktar’s situation it is necessary to go back to the day it all started.

It was September 27th, 2020, and at that point, during those days and those months we were having huge demontrations in Belarus – every Sunday, every week. It was at that day, that I wanted to go protest but I arrived to the meeting place earlier and I was waiting for the demostration to start, sitting on a bench and watching some video clips, which later turned out to be a huge mistake.

One moment Viktar was sitting on a bench and the next moment he was taken by the police to the police station. When he entered the cell for the first time, what seemed unimaginable to him before, quickly became his new reality. At night, he was transported to jail, where he was supposed to stay for a while. 13 – seemingly a small number – and yet considerable enough to make a jail stay feel like eternity. It is the exact number of the nights Viktar had to spend there until release. Let’s listen to him talk about the events from those times which are engraved in his memory.

A really small and short security guard came to us and said : „I am the same monster from Okrestino (name of another prison), fear me now”. We had completely no idea, what rights we had and we wanted to know what we were allowed to do. Because of that, one of my inmates pressed the button to call security guards. What happened next, was that the short „monster” came to us running, and after everyone had left their cells, he posed the question: „Which one of you did that?”. The unlucky inmate admitted to doing it and then – [rumble].

That’s how my stay in prison began – we haven’t been brought to trial yet and we were just sitting in our cell, waiting. The trial was conducted via Skype, on a regular laptop. Well…Yeah… My cellmates – who had been incarcerated before – told me, how back in the day, they were laughing about how in the future the trials will be conducted via Skype. Turns out, they weren’t wrong at all. During the trial, there was only one witness for 20 of the arrested people – apparently he saw each one of us, in different parts of the city, at one time. He listed a number of things that „I have done” and despite the fact that I denied it, I was sentenced to prison for 13 days. We all thought that we would just get a fine, but only one retired man did. However, we didn’t stay in the same prison for the next days – they transported us to another one, located in a different city. I must admit, that the security guards, who were transporting us, were quite all right. After we drove away from prison, they stopped the vehicle and they asked us whether we needed some water, face masks or wanted more light, which was very strange for us. You could feel that it is their job but also that they knew who they were transporting.

My last days in prison were rather calm – I could tell you about them but I think I won’t. I served my sentence and I left prison. I understood that it’s all finished when I spent the first night back home. I don’t know why, but it works that way. You realise that you are back at home when you fall asleep at home.

Luckily, there are two sides to every story – the negative and the positive one. Everything in our lives happens for a reason and Viktar’s story is one with a happy ending. He came to Poland with his friend – Irina – who has also experienced repressive measures and who found the program that they signed up for.

The Polish administration prepared a program in the name of Konstanty Kalinowski, which main goal is to help the Belarusian students that experience repression. It is an initiative showing solidarity with the Belarusians. I tried to apply for this program, because of the fact that the repressive measures have been also taken against me. After getting accepted, I came to Poland and started learning Polish. Currently, I’m studying at the university, and I have a different major from the one I had in Belarus – I decided to study Management, while in Belarus I was studying Management in Arts and Culture. The language course that we had, lasted only three months and the we took an exam to get a certificate. It was at B1 level, but my level is a very small B1…

While on the subject, why is Polish considered one of the hardest languages in the world? It’s probably best to explain it this way – at first, being able to speak Polish seems to be an unmasterable skill, its prefixes scare you away and what is more, there are: ,,ą”, ,,ę”, ,,ż”, ,,rz”, ,,ó” and ,,ch” waiting for you at every corner. Then you slowly start getting the hang of it, become more confident in speaking and when you dare to think that you are ready to start the studies in Polish, this scoundrel strikes again.

– I always understand the main point when someone speaks Polish but my vocabulary is very poor. When I’m attending a lecture, for example the „Microeconomy lecture”.

– You mean the „Microeconomics lecture”.

– Well, you already know what problem I’m going to have during the finals!

What we should ask ourselves, is whether a good command of the language is actually necessary to settle in a new place. I think, we can all agree that what matters the most in the process of getting used to living far away from home is who we surround ourselves with.

The first problem that I encountered after coming to Poland was the language barrier. I didn’t know any Polish families or people that could help me work on my language skills. The second problem was that at first I moved to Warsaw, where many people speak Russian so it was very hard to actually find someone who’d speak Polish. Furthermore, the Poles in Warsaw seem different – I feel like they are tired of the fact that many people in their city speak Russian or even a little bit angry about it, I would say. When it comes to Toruń though, I’m really surprised by the small number of people speaking this language. And the second thing is that the residents of our city are different from the residents of Warsaw – they are not that angry.

Getting yourself one or two chatty Torunians is highly recommended and then, the ability to use the Polish language will come with time. Irina and Viktar, when asked, whether they feel like their decision to move to Poland was right, reply…

Moving to Poland definitely wasn’t a mistake. It was a life – changing decision, a stressful, hard and spontaneous one – it was like „I’m packing my stuff and leaving”. We didn’t have any idea what’s going to happen next, where we’re going to live but the fate was on our side. We feel like we are constantly moving forward, we are not passive and we are not taking a step backwards.

What I can surely say now, is that I am 100% sure that I won’t be going back to my country. It’s not where I want to live – I will definitely go there to visit my friends and my family but I just don’t see my future there.

Toruń is quite a small city, but small is beautiful, right? Charming street, cozy coffeehouses in the main square and, above all, warm-hearted and open-minded people. Irina makes a good point saying that it is what distinguishes Toruń from Warsaw, where everyone is constantly rushing and where the structure of society is very much different.

– I’m standing there thinking: „Where the hell am I? Is it Poland?”. Roma people, billboards with Ukrainian ads – it was terrifying, I thought that I came to the wrong place. Toruń is very much different – it feels like legit Poland. In Warsaw there are many people from my country or people who speak Russian and the „composition of life” is different.

– It’s not correct to say it like that? Maybe „way of living” is a better thing to say?

– You know what? When we came to Toruń we really started hanging out with the Poles and it was at that point that we felt the difference in mentality, thinking process and we can definitely say that now, we like Polish people more.

And with this final positive observation, we are approaching the end of this story. Together with Irina and Viktar, we leave you with a thought – in life, we happen to find ourselves in places and situations where we didn’t even want to be. But is it something to regret? Sometimes, it is worth making a firm decision, when we feel deep down in our hearts that we don’t belong somewhere, and start looking for freedom on our own. After all, if one thing is certain, it is that the composition of life in Toruń deserves to be discovered.

Disappearing rice, -20 degrees and the lack of hot spices – Indonesians at the NCU →